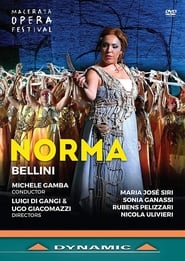 The blazing title role of Bellini’s Norma has been a star-making vehicle for some of opera’s most beloved sopranos, so when Sondra Radvanovsky first took on the part at the Met in 2013, it marked a new chapter of her career. She returned four years later to reprise her riveting portrayal, this time opening the 2017–18 season in an evocative new production by Sir David McVicar. Captured live in HD, her performance is nothing less than a tour-de-force, combining dramatic commitment with true bel canto singing—Radvanovsky balances the role’s powerful intensity with moments of delicate lyricism. As Adalgisa, the young priestess torn between love and duty, mezzo-soprano Joyce DiDonato delivers an interpretation imbued with great emotional nuance. Tenor Joseph Calleja is the aggressive Roman proconsul Pollione, with Matthew Rose as Norma’s father, the warrior Oroveso. Leading the Met Orchestra and Chorus, maestro Carlo Rizzi draws out the vibrant color of Bellini’s masterful score.